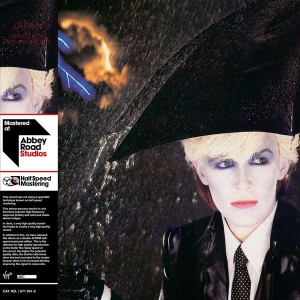 Releasedatum: 24-08-2018
Herkomst: NL
Item-nr: 3860741
EAN: 0602567104124
Op voorraad Op werkdagen voor 16:00 besteld, morgen in huis.
LP (1)
€ 29,99
In winkelwagen
Japan’s fourth and penultimate album, Gentlemen Take Polaroids was released in 1980. It was the group’s first album for Virgin Records, after leaving the Hansa-Ariola label, and the last to feature guitarist Rob Dean. It features the single "Gentlemen Take Polaroids" and the atmospheric, Satie-esque “Nightporter”, which was eventually released as a single in November 1982, shortly after the band announced they were to split. The album is widely considered as the one which consolidated Japan’s unique aesthetic approach and sound.

Mastered by Miles Showell at Abbey Road, each record was cut using a half-speed mastering technique; a specialist artisan process, which results in cuts that have a superior high frequency (treble) response and solid and stable stereo images. In short this produces a very high quality master, which in turn helps to create a very high quality record.

Additionally, each album is album is being released as a double 45 RPM half-speed mastered edition, the ultimate high quality reproduction as the faster the replay speed of the record, the higher the potential quality. The shorter side times also allow the level recorded to the master lacquer discs to be increased, thereby improving the signal to noise ratio.