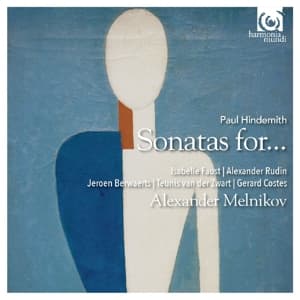 
Hindemith: Sonatas for piano and….

Hindemith composed more than 30 sonatas for the most diverse instruments – all of which he was capable of playing himself! This fascinating selection of works written between 1935 (when he became persona non grata in Nazi Germany) and 1948 (the brilliant Cello Sonata for Piatigorsky) is played by some of today’s finest soloists, with the guiding spirit of Alexander Melnikov at the piano. How often does one hear a sonata for Althorn? Especially one published along with a poem by the composer?

Alexander Melnikov has made something of a speciality of chamber music; a recent collaboration with cellist Jean-Guihen Queyras saw them record Beethoven's complete works for cello and piano, and two of his piano trios when joined by Isabelle Faust, with whom he has recorded Beethoven's ten violin sonatas. He has also worked with the Jerusalem Quartet to perform piano quartets and quintets by Schumann – though of course he is no stranger to solo piano repertoire, with a set of Shostakovich's Preludes and Fugues to his name as well as a recording of Brahms' first two piano sonatas.

His latest disc is a return to his chamber-music form - accompanying a range of soloists in instrumental sonatas by Paul Hindemith. I caught up with him to talk about this new album, and the role the pianist plays in such music.

This is a rather unusual choice of repertoire; while it would be uncharitable to describe the piano parts of these sonatas as mere accompaniment, in many cases it is the instrumental soloist who is more prominent to the listener. So what initially drew you to such a “selfless” album, rather than say a collection of Hindemith’s music for solo piano?

Thank God I never think of chamber music as a vehicle for determining "who is more prominent", even when the piano part is a "mere" accompaniment. If I may ask - what's wrong with the accompaniment!?

In all seriousness, I was attracted (apart from the purely musical merits of the pieces of course) exactly by the possibility to play in all those unusual combinations. It's no secret that for trumpet or trombone (let alone the Althorn) those sonatas are the cornerstone of the repertoire; That was Hindemith's intention and that is precisely what he has achieved. Try to talk to a trombonist and discuss Hindemith's significance ;) ...

My other goal was to have an argument for Paul Hindemith in general (not that he needs my help of course) - because of Theodor Adorno in the German-speaking world - and because of the totally inexplicable aversion to Hindemith in the British Isles the composer has acquired an unfortunate reputation of being "boring" or dogmatic. Anything but! I find his music extremely witty, his humour faultless, and the tragic bits leave nothing to be desired either, so to say. In addition he has hardly written any bad music - I know here everyone will fiercely argue with me, but isn't it all a matter of taste too...?

All these sonatas come from Hindemith’s late period, ie the 1930s and 40s; do you think their various musical “moods” can be said to mirror the changing course of world events before, during and after the Second World War?

I never know how to answer those questions... In the case of the genius last movement of the Trumpet Sonata - of course yes, and there Hindemith gives us unequivocal explanation. The Althorn Sonata is also clearly programmed, but it deals more with the conflict (or the absence of thereof) between the past and the present. All the pieces on the CD have different "weight" - one can not really compare the "1948" Cello Sonata - in my opinion one of the most important cello sonata of all times, and the 1936 Violin Sonata in E - a beautiful piece but much more intermezzo-like. The Sonata for Trombone is a wonderful essay of the instrument, it is very humorous, with some true lyricism of course. All in all there are two "heavy" pieces - cello and trumpet - and three "light" ones on the recording.

Hindemith’s observation that the solo repertoire for wind instruments is limited is, alas, a largely correct one; from a historical point of view, why do you think the wind section has generally lagged so far behind the big stars of the piano, violin and cello in inspiring new works from composers?

The question is somewhat generic; if I start answering it, it will sound much like Wikipedia articles on the individual instruments - what is the history, how it developed etc. Again one can't really compare, say, flute with tuba - one being a royal instrument never suffering from a lack of composers' attention, another never really intended to be a solo instrument... Needless to say Hindemith has written sonatas for both. I was very sad not to include them because of the time constraints. An interesting point your question made me think about - is there more music written for flute or for cello?

The Sonata for Tenor Horn (Althorn) can, according to Hindemith’s own notes, equally well be played on the French horn or the alto saxophone. Doesn’t this rather undermine the idea of it being a “musical portrait of the instrument”, since this “portrait” has three possible subjects – each with very different personalities?

I think that here we are talking about purely practical considerations. Having arrived to the USA Hindemith has discovered that more or less nobody has heard of the Alto horn there, so he said it could be performed on the F horn or sax - better than not being played at all. To this day there is an enormous confusion about the instrument - to start with, 'Althorn' in German has entirely different meaning from 'Alto horn' in English, secondly in English alone 'Alto horn' means different things on both sides of the Atlantic. The instrument anyway is somewhat of an ugly duckling of the brass section - and yes we really wanted to give it a voice, we do believe the the "portrait" here is highly individual as you say! Thank you for the question and for the correct English (UK) translation of the term 'Althorn'!

As someone who’s no doubt familiar with piano pieces in four or five parts, such as the contrapuntal works of JS Bach, what do you make of Hindemith’s contention that the listener can only perceive a maximum of three parts in a musical texture?

To answer this one would need to write a little book ;) We touch too many different subjects here; must the music be enjoyed only by hearing it? If so, then JSB is already a non-starter. Yet it is absolutely overwhelming as a pure audio experience, but there is so much more to it if one plays it or simply looks at the score. Secondly I am convinced that Glenn Gould could perceive more parts than an average person. Hindemith's observation is correct but only in quite a narrow sense - again there is nothing wrong with it!