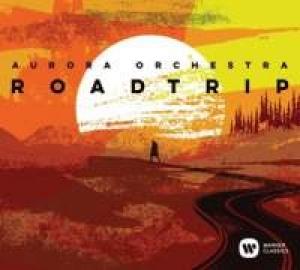 Aurora Orchestra’s ROAD TRIP takes listeners on a journey across America with a programme that juxtaposes core American compositions by John Adams, Charles Ives and Aaron Copland with specially commissioned arrangements by the American composer Nico Muhly, short new works by Aurora Orchestra member Max Baillie and Muhly’s arrangement of Paul Simon’s hit Hearts and Bones. The collaborations - with Muhly and American singer-songwriter guest soloists Sam Amidon and Dawn Landes - are inspired and refreshing for a classical album and typical of the way the Aurora Orchestra approaches all its programmes. Founder and Principal Conductor Nicholas Collon is in charge of the proceedings. This is the orchestra’s first recording for Warner Classics.

ROAD TRIP developed from a concert that Aurora Orchestra performed at London’s LSO St Luke’s in March 2012, which was broadcast live on BBC Radio 3. The concert was singled out by Gramophone magazine as one of its Live Highlights of 2012. When Aurora Orchestra repeated the programme at London’s Kings Place in January 2014, The Arts Desk wrote, “May this be a New Year sign and a symbol of a revitalised concert scene to come: an eclectic programme of dazzling range to draw in the new pick-and-mix generation, full of segues that worked and executed with the right balance of poetry and in-your-face exuberance by a crack team of young players.”

Aaron Copland (1900-1990), composed Appalachian Spring as ballet music for the great American modern dancer and choreographer Martha Graham. In eight movements, Appalachian Spring “captures the essence of an ideal America, one of open fields and endless possibilities.” Shortly after its premiere in 1944 Appalachian Spring was awarded a Pulitzer Prize and it became so popular that Copland turned it into an orchestral suite in 1945. Probably its best known tune is the Shaker hymn Simple Gifts. On ROAD TRIP, the Aurora Orchestra performs the original chamber version.

Reynardine, The Brown Girl and Heart and Bones are offered in arrangements by Nico Muhly: The Brown Girl is a traditional ballad, a tragic story in which the three protagonists come to grizzly ends; Reynardine is an English ballad about a werefox, whose guile and daring secure him the hearts (and throats) of love-struck maidens. Hearts and Bones, from Paul Simon’s 1983 album of the same name, reflects on a journey he and his then girlfriend Carrie Fisher had made through New Mexico.

“I feel about Aurora what audiences in the early 1960s must have sensed about the Academy of St Martin in the Fields: that this is an ensemble talented and ambitious enough to wrench the initiative from more established chamber orchestras. It’s a generational turnover, and very healthy for musical life.” – The Times

Since its creation in 2005, Aurora Orchestra has established itself as the most significant new British chamber orchestra in a generation, combining electrifying live performance with a uniquely creative approach to programming and presentation. Under the artistic direction of Principal Conductor Nicholas Collon, Aurora has developed flourishing London series as Resident Orchestra at Kings Place and Associate Orchestra at LSO St Luke’s. They also appear regularly at other major London venues, such as the Southbank Centre, Wigmore Hall, Barbican and Royal Albert Hall and throughout the UK, while their international tours have seen them equally rapturously received throughout the UK, Europe, China, Australia, Russia and South America. The orchestra works with a roster of internationally renowned artists across multiple art forms.

Whether mixing Brazilian capoeira with French baroque music, tango with Bernstein, klezmer with Mahler or breakdance with Shostakovich, whether performing in concert halls, schools, hospitals or museums, Aurora’s projects are illuminating, their performances filled with vitality and joy. Their concert of works by Frank Zappa, Conlon Nancarrow and Philip Glass at the 2013 BBC Proms was described as “the most imaginatively programmed of all this year’s Proms” (Bachtrack) and “a truly life (and death) enhancing concert.” (The Times) The Orchestra has played a central role in each of the venue’s yearlong ‘Unwrapped’ series at Kings Place, where they have been based since 2009. In their New Moves series at LSO St Luke’s, they have established inspired artistic partnerships across dance, film, visual arts and theatre. Aurora Orchestra became the youngest-ever recipient of The Royal Philharmonic Society’s Ensemble Award when the Society recognized the success of New Moves with its most prestigious accolade for live classical music. At the 2014 Proms, their premiere of a new work by Benedict Mason was described as “an avant-garde happening that left one speechless with its epic zaniness.” (The Times)

The “Road Trip” concept has been developed from a programme that was premiered at LSO St Luke's in March 2012 (broadcast live on Radio 3). It Road Trip but opting for a more straightforwardly American repertoire selection and interspersing the core repertoire with some beautifully arranged folk/pop songs inspired by the same theme.