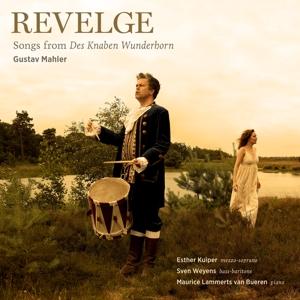 A cuckoo and a nightingale compete in a singing contest with a donkey as their judge. A sentinel muses on life in the mysterious night. Saint Anthony tries with all his might to convert the fish. A soldier pays a last visit to his beloved before leaving for the battlefield. Humour, romance, drama, myths and fairytales: all this can be found in the poems of the collection ‘Des Knaben Wunderhorn’. Mahler was quite fond of these poems and used more than twenty of them in his compositions.
The alternation between transcendent, sometimes religious songs, rough, poignant and jovial soldier songs, comic fables and folk tunes, all in an overarching and ever recognizable mahlerian idiom, makes these songs so appealing to perform and to listen to.
We have selected a few military songs like ‘Revelge’, the soldiers’ morning wake-up call, the woeful ‘Zu Strassbourg auf der Schanz’, the excited marching tune ‘Aus! Aus!’, the enigmatic ‘Wo die schönen Trompeten blasen’ and ‘Schildwache Nachtlied’, in which during his watch, a sentinel seems to have a vision of a girl waiting for him and wanting to console him with her soft words.
Seemingly an odd choice is ‘Wenn mein Schatz Hochzeit macht’, well known as the first song of the earlier song cycle ‘Lieder eines fahrenden Gesellen’. This poem however is also mainly from ‘Des Knaben Wunderhorn’, with a few additions by Mahler himself.
Two more songs in which love is marred by parting are‘Scheiden und meiden’ and ‘Nicht wiedersehen’.
In ‘Urlicht’ one hears the human struggle with mortal existence and the longing for liberation.
Flanked by tongue-in-cheek songs as ‘Des Antonius van Padua Fischpredigt’, in which church-goers pretending to be pious are satirized, and the jesting song ‘Lob des Hohen Verstandes’, in which Mahler gives his critics a piece of his mind, this music creates a world in itself in which both listeners and musicians are able to recognize themselves.