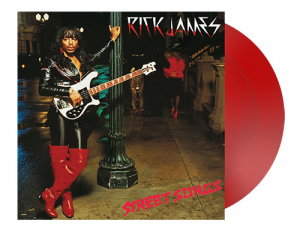 Street Songs is Rick James’ fifth studio album and was released in April 1981.
It features the tracks “Give It To Me Baby” (sampled by Michael Jackson for “Thriller”, Public Enemy, Jay-Z, and many others) as well as the classic “Super Freak” – memorably sampled by MC Hammer for “U Can’t Touch This”
The album was a huge success, hitting number three on the US Billboard Pop Chart, and was certified platinum in the US in July 1981 and has sold over 4,000,000 copies.